On Tuesday, July 8th a tractor trailer backed up to the BackPack Weekend Food Program (BWFP) warehouse loading dock with approximately 40,000 pounds of potatoes which would become food for hundreds of families across Gaston, Lincoln and Cleveland Counties! Rev. Angela Hollar, an elder in the Western North Carolina Conference of the United Methodist Church felt the need to help the community in some way and reached out to a colleague Rev. Michael Binger who is the regional director of the Society of St. Andrew for the Carolinas. This non-profit organization works to help stop hunger through gleaning and working with farmers and hundreds of volunteers to help eliminate food wastage. Since 1992, the Society of St. Andrew has operated a statewide, volunteer-driven Gleaning Network that coordinates with local farmers, thousands of volunteers, and food providing agencies. The North Carolina Gleaning Network is going strong, salvaging over five million pounds of fresh produce for the hungry each year. Rev. Hollar worked with Rev. Binger to coordinate the delivery of the potatoes to Gastonia.

Rev. Hollar, a member on the board of directors for BWFP, felt it was a natural partnership to start with the agencies and churches who are involved with the BackPack Weekend Food Program in Gaston County as well as others. Rev. Hollar reached out to Dallas Butler, Executive Director of the BWFP, along with Becky Greene, director of Spiritual Formation at FUMC, Gastonia and Theresa McIntosh, FUMC, Gastonia coordinator for Family Promise to join her in this outreach effort during a time when so many people are struggling to make ends meet. So a potato drop became a reality. 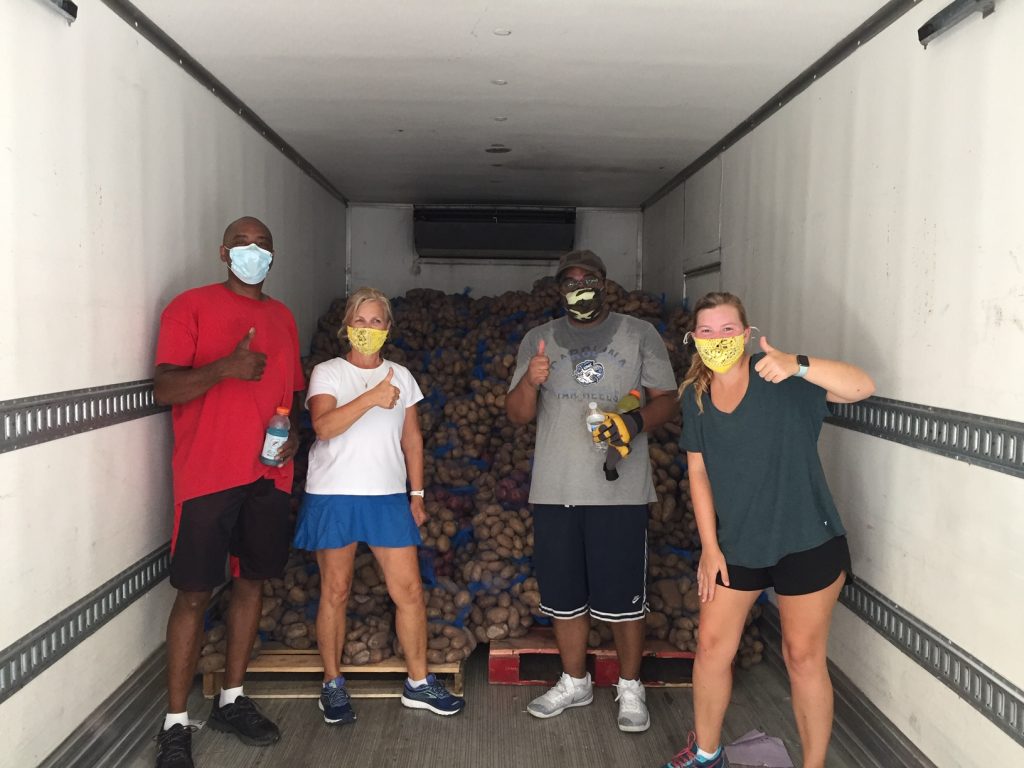 Using community contacts through the BackPack Weekend Food Program along with many churches the following organizations participated in the potato drop:

Through the teamwork and efforts of approximately 220 volunteers from these churches and agencies, this event blessed hundreds of people not only those receiving the food but those who volunteered their time to make this event possible. Volunteers followed the governor’s mandates and CDC guidelines for COVID-19.