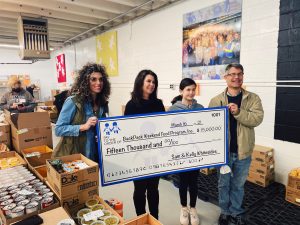 As a child growing up in Queens, New York, Kelly Whitesides knew what it meant to worry about where her next meal was coming from.

“I know how important this program is,” she said, as she stood with her husband Sam in the BackPack Weekend Food Program warehouse on Linwood Road in Gastonia.

Whitesides had volunteered with the program several years ago, but she and her husband, Sam, had their interest renewed when they read a recent front-page column inThe Gazetteabout how the COVID-19 pandemic has negatively impacted BackPack’s fundraising efforts.

“We saw that article, and we really felt moved to do something,” Sam explained.

That “something” was a generous gift of $15,000 to the BackPack coffers.

“I love the way this program is run,” said Kelly, mentioning Executive Director Dallas Butler and Coordinator Suzanne Jones. “The operation is so efficient. They don’t do it for accolades. They do it because their heart is in the right place.”

In accepting the contribution, Butler said, “Thank you so much. Every day working at this job is a privilege and a gift. You won’t find a better group of volunteers anywhere.”

Sam, who is retired from a career in commercial real estate, said he and his wife worry about students who receive free or reduced lunch and breakfast each day at the public schools but who have no good source of nutrition on the weekend.

“That Friday night through Monday morning is so important,” Kelly said. “That’s the gap that this program helps to bridge.”

A review of the organization’s statistics from the 2019-20 school year demonstrates just what an important role the program plays in the fight against child hunger.

The program served 43 schools with the support of 47 partnering organizations.

More than 900 students received weekend food from the program, including 774 elementary students and 137 middle/high school students.

Through the end of March, when the schools were closed to help slow the spread of COVID-19, a total of 135,261 meals had been provided.

The meals are nutritionally balanced and non-perishable and designed to provide food for each student for the entire weekend, with extra food included if it is a three-day weekend.

The BackPack Weekend Food Program has nearly 50 partners who support the program financially and who pack and deliver meals to the participating schools. They include: